In an earlier article, I pointed out several issues I have with the Ranked Choice Voting (RCV) process, specifically transparency and fairness.  I also had a healthy skepticism about the motives for those pushing RCV.  I think I figured out the end game.  (That’s a tease to read to the end.)

RCV is being presented as an unmitigated good thing.  While there are merits, there are certainly shortcomings.  I feel strongly that the nirvana of the election process that is being promised will fall to the Law of Unintended Consequences. 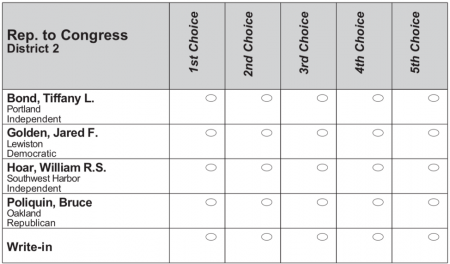 First, let me present RCV in the context of the Maine 2nd Congressional race that was decided using RCV in 2018.

Dr. Fred Van Bennekom will discuss RCV with your group to help you understand how RCV will change elections & electioneering.

The 2nd Maine district was decided by RCV “logic” in 2018.  The incumbent, Bruce Poliquin, “won” the 1st “round” of voting 46.3% to 45.6% over his key challenger Jared Golden.  Lacking a majority (>50%), RCV kicked in, meaning the ballots for the 2 independents (Tiffany Bond and William Hoar) who polled at the bottom of the 1st round were examined for their 2nd choices.

Jared Golden overwhelmingly won the 2nd place votes from Bond & Hoar getting 68.7% of those votes.  Golden won the election getting 50.62% of the “votes” versus 49.38% for Poliquin.

Let’s dive into the election results. 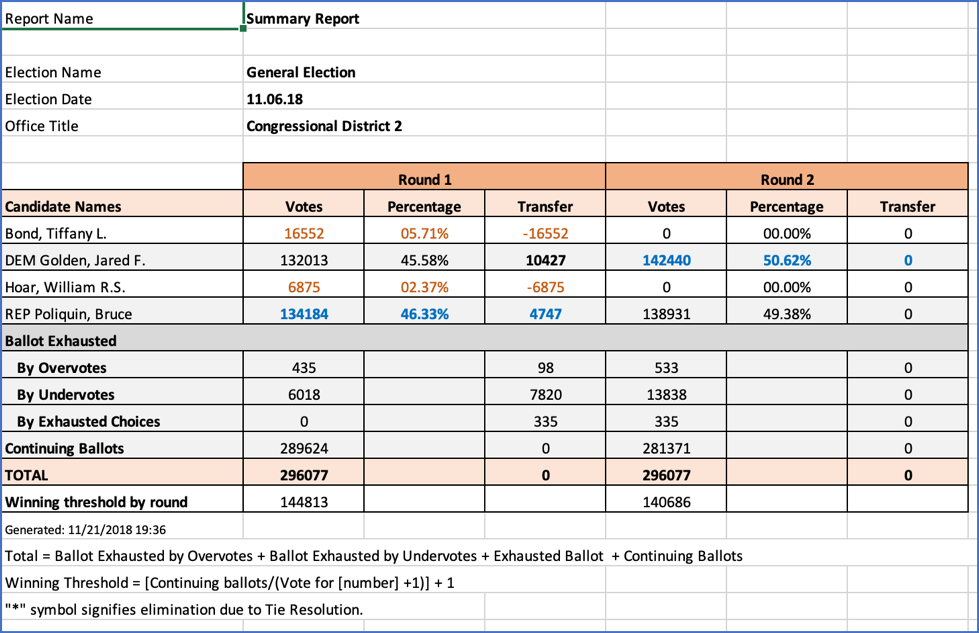 Above are the election results taken directly from the Maine Bureau of Elections.  It’s the spreadsheet from the “Certified Results” link.

The proponents of RCV in Maine state:

Ranked Choice Voting is simple, fair and easy. Voters have the freedom to rank candidates in order of individual preference. Ballots are counted in rounds where last-place candidates lose until one candidate reaches a majority and wins.

First of all, read the 2nd sentence in the above quote.  Understand what it says?  If you do, my hat is off to you.  It’s gobblygook.  If the proponents can’t readily explain it, how simple and transparent can it be?

Now look at the above spreadsheet from the Maine Election Bureau.  Understand it?  Again, if you do, I bow to your preeminent intelligence.  I played with the spreadsheet for about an hour, and I pretty much figured out the math.

I went to that guide to get definitions for the types of Exhausted Ballots:

Stunningly, none of those are in the Definitions section of the document!  Overvote is explained in context.  However, Undervote and Exhausted Choices are terms never defined nor used in the document.  So, how did the tabulators know how to determine if ballots fit into those categories?  Even the state law that created RCV does not define or use the term Undervote.

[Side Note: If you understand the RCV rules, you might be wondering why there isn’t a separate round for each eliminated candidate.  Maine uses a “batch elimination.”  Hoars vote was 2.37%.  Apportioning 2nd place votes for those ballots would not put anyone over 50%.  So, both Hoar and Bond were eliminated together.

That’s explained in the above referenced document, but boy, it’s not transparent.  Just trying to explain all this here is difficult!]

I’m guessing an Undervote is where no candidate was selected by the voter for a given ranking.  Since it’s not defined, that’s a guess.  The Overvotes are where a voter selected more than 1 candidate in a ranking.

The best way to determine the ease of casting RCV votes is to look at the percentage of ballots disqualified for this office.  The nearby table summarizes it for the 2 rounds.

My table looks a little different than the previous spreadsheet.  Round 2 focused on the 23,427 votes “Transferred” into Round 2 from ballots cast for Bond and Hoar in Round 1: 16, 552 for Hoar and 6875 for Bond.

When we’re looking at disqualified ballots, 23,427 is the relevant denominator for Round 2.  (I think – again, it’s not transparent…)  The state’s spreadsheet summarize Exhausted Ballots for the rounds combined.

That level of disqualification doesn’t seem too bad – a bunch of people just didn’t bother to vote in this election.

A full third of the ballots that entered the 2nd Round were disqualified.

To me that’s a pretty stunning percentage and throws into doubt simplicity and ease.

Most of those people (7820) self-disenfranchised from casting a relevant vote.  Many probably did understand what they were doing.  Is that fair?

Note: the Golden’s margin of victory was 3509 votes.  And 8253 ballots were not used in the 2nd round that resulted in Golden’s victory.  Again, fairness?

The Strategy for Winning RCV Elections

I was scanning the votes cast ballot by ballot in the election.  (You’ll see those spreadsheets on the website.)  I was thinking, “What’s the end game here?  Golden won because he won 2/3rd of the 2nd round valid votes.  How does this happen?”

Logically, the 2 independent candidates, Hoar & Bond, were closer ideologically to Golden than Poliquin.  Presumably in a traditional runoff election, those voters would have voted for Golden. But that presumes they would bother to vote in a runoff.

That’s when I figured out the strategy for winning elections in an RCV environment.

With RCV, the incentive is EXACTLY THE OPPOSITE.

You want fringe candidates on your side of the political aisle.

With RCV fringe candidates are a get-out-the-vote strategy.

This is especially valuable in off-year elections where voter enthusiasm is lower.

Predictions on the RCV impact on Election Strategy

Strategic voting may be reduced with RCV (as claimed by RCV supporters), but we now will see a wholesale change in election strategy, not by political parties, but by groups on both ends of the ideological spectrum.

We can expect to see:

An Example of Winning an RCV Election

Let’s take an extreme, but possible example to show how the strategy might work.  Imagine there was a special election for a local state office.  Special elections are notorious low-turnout events.

The district has 5 towns.  Party 1 has one solid candidate with a following in several towns..  Party 2 has no favorite but has very popular potential candidates in each town.

Normally Party 2 would try to get weaker candidates to drop out before any primary so the strongest candidate wins the primary.  But with RCV, Party 2 would want all 5 candidates to stay in the race with 4 as indepedents.  The 5 candidates would increase the overall turnout for the election because people would get out to vote for their neighbor, friend or colleague.

Party 2 just needs to help educate voters of the independents about their 2nd place votes.