CNN’s June 2020 poll found a huge partisan difference in comfort levels with regular routines due to Covid. But is it partisan or other factors? What can we learn for our organizational surveys.

CNN’s poll in June 2020 attempted to measure people’s comfort level in returning to their regular routines. However, this poll proves the existence of either sample bias or conformity bias, or both.

Conformity Bias occurs when the respondent gives an answer that is socially desirable rather than an answer that reflects their true feelings. This bias in the data compromises the value of the data and our analysis. 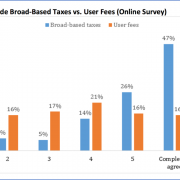 MassMove report on transportation priorities in Massachusetts does not have sound methodology and should not be used as the basis for decision making. It’s a wonderful example of how to concoct a research program to deliver the “findings” the sponsor wants. Shame on the Mass State Senate.

Meaningful survey results require a valid questionnaire and an unbiased administration of the survey. The CTE brain trauma study of NFL players used biased survey samples, which clouds conclusions from the study.

In the survey research world, so-called non-response bias is an ever growing challenge for solid, viable research, even if many people simply ignore the threat. Election seasons present a great opportunity to explain the concept.