Summary: The US Department of Health and Human Services (HHS) conducts a survey of patient experiences, the HCAHPS Hospital Quality Survey. The survey results are used to determine, in part, reimbursement by government to specific hospitals based upon the quality of care. But does the survey truly measure hospital quality? This article examines some of the administration biases and instrumentation biases that are present in the survey — to my surprise. In fact, the most important question has the most serious design shortcomings.

The front page article of the Wall Street Journal on October 15, 2012 reported on the role of a patient satisfaction survey used by the US Department of Health and Human Services (HHS) to measure hospital quality — “U.S. Ties Hospital Payments to Making Patients Happy.” This is not just a “nice to know” survey. The results are applied in a formula that determines the amount of reimbursement that hospitals get from HHS.

Given its impact, HHS treats the survey methodology with some care. Online, I found academic articles discussing the adjustments made to the results based upon the mode of survey administration — phone vs. web form. But upon looking at the survey process itself, biases from the instrument and the administration process abound.

The survey may be conducted by vendors either by postal mail or by telephone.  Let’s consider the hardcopy, postal mail survey.

In the age of HIPAA (Health Information Portability and Accountability Act), I found this most odd.  I would complete this survey due to the response bias created by this lack of confidentiality. While my “participation” may “not affect [my] health benefit,” it might affect how the hospital and staff treat me the next time I’m at the hospital !!

Consider the rather vulnerable position in which patients find themselves at a hospital. Basically, you’re being asked to be a whistleblower — assuming you have negative comments — with no protection. Granted, it might be far-fetched to think that a hospital employee who got called out from a survey would mistreat the patient who gave a bad review, but if you’re in a vulnerable health situation, would you take the chance?

This response bias may lead people to not participate, and it may also color how they respond if they do complete the survey — a measurement error.

Now let’s turn to the instrumentation biases in the survey instrument itself.

The most puzzling question to me is the question that probably gets most used by HHS — Question 21. The last section for feedback is about your “Overall Rating of Hospital.” The instructions are quite explicit.

Do not include any other hospital stays in your answer.

As a transactional survey, I understand the need to have the respondent focused on this one event. But Question 21 then asks for a comparative answer.

Please tell me how you can answer that question without thinking about “other hospital stays.” You can’t. The question is asking for a comparison, and the instructions tell you that you shouldn’t compare!

I am frankly stunned that this type of wording error could be in a survey question that is so critical to so many organizations in our nation.

Further, there’s no option to indicate you cannot make a comparison, while other less critical questions allow the respondent to indicate the question is not appropriate or applicable to them.

Consider my situation. I have not had an overnight hospital stay since I had my tonsils out when I was 5 — many, many decades ago. I have been fortunate that any medical issues have only required outpatient procedures.

What if I then required a hospital stay was asked to take this survey?  How do I answer the comparative question? I can’t without simply fabricating a benchmark based on general perceptions. How valid are my data? How would you like to be a hospital president whose reimbursement is reduced based upon such data?

Even if I had had other hospitals stays, wouldn’t it be analytically useful to know how many stays I’ve had in the past X years that form my comparison group? In fact, shouldn’t the comparison group be hospital stays in the past few years? (Maybe they have all that data in some database on all of us — a scary thought, but not out of the question in these days of “command and control” central authorities.)

For a question that is so critical to the overall assessment, it has serious shortcomings.

The survey instrument has other design aspects that don’t thrill me.

Albeit, some of these are minor issues, but many are not. In such an important survey, shouldn’t the instrument have as clean a design as HHS expects of patients’ “rooms and bathrooms”?

Finally, in a delightful bit of bureaucratic irony, the survey must include a long paragraph to fulfill the requirements of the “OMB Paperwork Reduction Act of 1995”. This verbiage may require the printing of an extra page, increasing the paperwork! 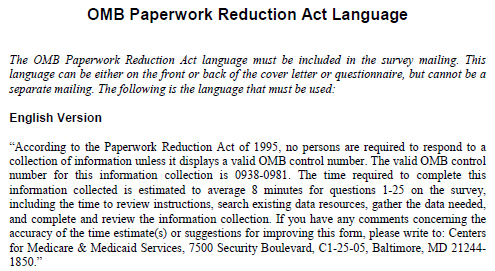 But more importantly to the validity of the survey results, isn’t the language of this required statement a bit intimidating? This “collection of information” instrument must have a “valid OMB control number.” If you’re unfamiliar with OMB and bureaucratic language, this phrasing could scare people off from taking the survey. I’d be curious to know if the impact of the statement upon the survey responses has been tested.

Oh, yes. “What’s OMB?” you ask. Office of Management and Budget, of course. The acronym is never written out for the respondents, introducing yet more ambiguity, and maybe intimidation. Apparently, we’re all supposed to know the government’s acronym dictionary.

How silly. How presumptuous. How damaging to data validity.