Survey Statistical Confidence: How Many is Enough?

You are here: Home1 / Survey Administration2 / Survey Sample Size3 / Survey Statistical Confidence: How Many is Enough?

How Many is Enough?

In my conference presentations, I am inevitably asked about typical response rates and survey statistical confidence — usually before I get to that part of my presentation. Questions range from:

I have also heard two conference presenters when asked about survey response requirements — even though that wasn’t topic of the talks and far from their areas of expertise — say that 30 responses was all you need for reliable results. (I think they recalled the Central Limit Theorem from a statistics class.)

If only life — and statistics — were so simple.

Here’s an obvious statement: The more completed surveys you get:

So, we face a trade-off between cost and accuracy. How big a trade-off?  That depends upon how we administered the survey — postal mail, webform, telephone, etc. — but that’s the topic for another article. (BTW, we cover all of this in depth in our Survey Design Workshop.)

Get our Excel-based calculator. Use it to determine sample size needed for some statistical accuracy or to gauge accuracy after the survey has been completed.

But What Survey Response Rate Do I Need?

The statistical equations here are a bit daunting. (They can be found in most any statistics textbook under “sample size.”)  Years ago when preparing a conference presentation, I created the nearby chart.   While still complicated, it’s a lot more understandable than the equations! 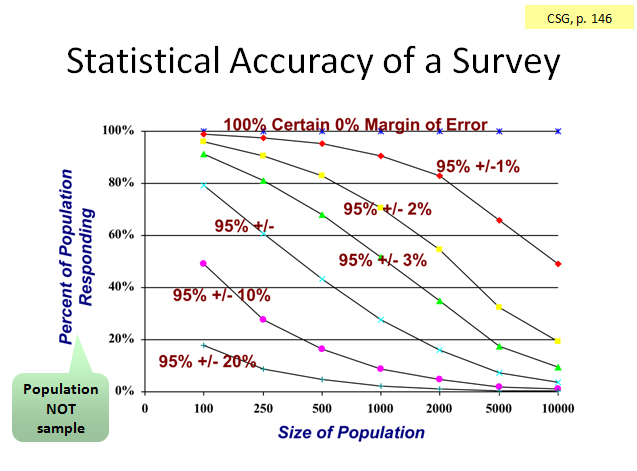 The chart shows seven lines that depict seven levels of survey accuracy. The first one is the horizontal line at the top. If we survey the population and everyone responds, we are 100% certain that we are 100% accurate. We have population parameters. Of course, that will likely never happen.

First, some important points from the chart:

Now let’s interpret those curves. Each curve shows 95% certainty of some range of accuracy. (95% confidence interval is chosen by convention.) Let’s focus on the accuracy part of the statement.

Running your own survey programs?

Learn how to do it right from us —  the premier worldwide trainers for survey design & analysis.

Let’s say our questions use an interval rating scale that ranges from 0 to 5 (so there are 5 equal intervals in the scale). If we get enough responses so we’re on the +/-10% curve, then we’re pretty certain the “real” answer (the population mean) lies no more than 10% from the mean score we got (the sample mean), which is half an interval (0.5) on either side of the mean.

Take a deep breath and re-read the above…

Say you have a population of 1000, and you sent a survey invitation to 500 people. Half of those responded. So, 25% of the population responded. Find the intersection of 1000 on the horizontal axis and 25% on the vertical axis. You would be approximately 95% certain of +/-5% accuracy in your survey results.

Conversely, if we have an accuracy goal for the survey project, we can use this chart to determine the number of responses needed. Say we have that population of 500, and we wanted an accuracy of +/-10%. Then we would need about 18% of the population to respond, or 90. (Find those coordinates on the chart.)

By applying an estimate of our response rate, we can then determine the number of survey invitations we must send out, which is our sample size. If we estimated a 25% response rate, then we would need a sample size of 360. (360 x .25 = 90)

Take another deep breath and re-read the above…

The confidence statistic tells us the size of the band or interval in which the population mean most likely lies – with a 95% certainty. (Technically, the interval tells us where the mean of repeated survey samples would fall. With a 95% certainty, 19 of 20 survey samples drawn from the population of interest would lie within the confidence interval.) 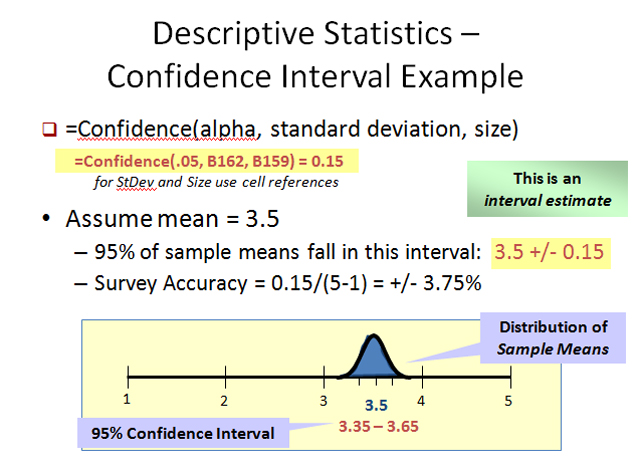 Look at the above chart. It shows the calculation of the confidence statistic using Excel. Alpha is likelihood of being wrong we’re willing to accept. (.05 or 5% being wrong is the same as 95% certainty we’re correct.) The standard deviation is square root of the variance, and can be calculated using Excel. Size is the number of responses.

Let’s close by dispelling the myths in the opening three quotes.

Everyone conducting a survey is concerned about response rates and the accuracy for their survey results. This is one part of a survey project that does require some fundamental understanding of statistics. In our Survey Design Workshop, we spend considerable time on this topic.

You don’t need to be a statistician to do a survey, but you do need some understanding of statistics to be sure you’ve got data that sets a firm basis for decision making.

The Importance of Measuring Importance — Correctly — on Customer...True Customer Care
Scroll to top