Visual Analog Scales were created for use in hospital emergency rooms to assess pain from patients where language skills can’t be assumed.

Unfortunately, it’s been amended – you could say corrupted – such that the scale is not analog (continuous) and not really a visual scale.

A friend recently had a medical condition that required EMT (Emergency Medical Technician) response. The lead person asked my friend, who was flat on his back, “How much pain are you in where one means no pain and 10 is the worst pain you’ve ever experienced.”  That oral presentation was based upon the commonly used Visual Analog Scale (VAS) for pain assessment.

We’ll look at the evolution of the Visual Analog Pain Scale in the context of how measurement scales are presented to the respondent.

How to Present the Survey Scale

In the surveying process, we typically use lots of scalar questions.  You know, those 1-to-10 questions…  We hope that they are interval rating scale questions, but that’s a separate discussion.  At worst, they’re ordinal scale questions.

The survey designer must decide how to present the scale to the respondent – a critical survey design decision.

The surveyor has four different options:

The respondent is asked to identify the place on the scale that best matches their views. The choice is coded with a number to measure whatever we’re trying to understand – the phenomenon of interest – such as degree of satisfaction. The response could be coded with the verbal descriptors, but text is a hassle to analyze.

All four of these presentation methods can be administered on paper or video screen, but only the Verbal and Numerical methods can be presented orally —  in a telephone or personal interview.

In fact, numeric and visual scales must be combined with words or pictures that label or anchor the scale for the respondent.  Numbers and lines have no inherent high-to-low designation.

You might think that numbers do run low-to-high, but whether a 1 is high or low is driven by context and cultural factors.  Ever hear fans at a sporting event cheer: “We’re number 10!”?  10 can be good or bad depending upon the context.  Thus, a verbal label is needed. 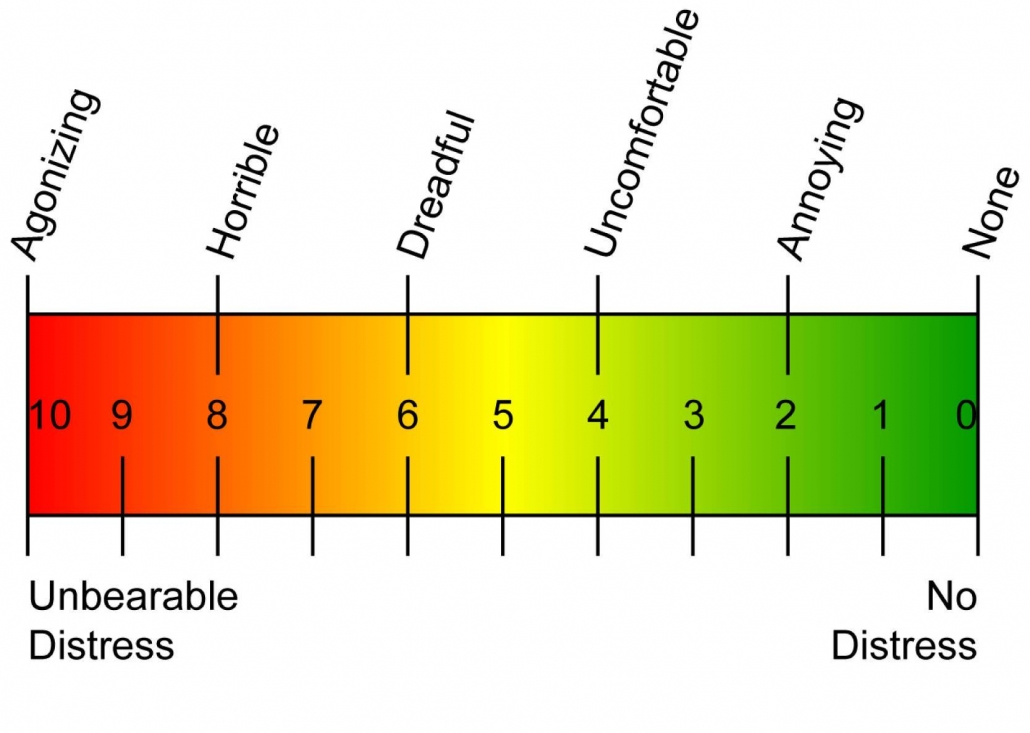 The Visual Analog Scale (VAS) is one such combination scale presentation, developed by Hayes and Patterson in 1921.  It was created for use in hospitals where pain levels need to be assessed quickly with patients who might not understand the local language.

Here’s the concept.  The patient is shown a sheet of paper with a 100 mm horizontal line where one end of the line represents no pain and the other end extreme pain.  Ask the patient to indicate how much pain they’re feeling by marking a place along the line.  The distance to the mark is measured, and voila, we have a measurement on a 0 to 100 scale.

A line (or slider) technically has an infinite number of points on it.  That’s continuous or analog.

While an analog scale has an infinite number of points on it, whatever point the respondent chooses is usually coded as a 0-to-100 scale.  While we could be more precise and measured to the 10th of a millimeter, at some point we simply have “false precision.

The Evolution of the Visual Analog Survey Scale

Now, look at the commonly-used example of the VAS shown nearby.  You might be thinking, “I see a line divided into 10 segments with hashmarks, coupled with smiley faces and words.  How does that jibe with your description?”

The VAS has been “improved” over the years – or bastardized if you prefer – to the point that “Visual Analog” is a truly misleading descriptor.

Now that’s a mouthful!  But it is a better description of this measurement instrument.  The current name distorts the meaning of Visual and Analog.