How a Bad Survey Checklist Question Can Confuse Findings

How a Bad Survey Checklist Question Can Confuse Findings

Checklist questions are one of the more common survey question types, and they are also used heavily in data collection forms, which are a form of survey.  And for good reason.  You can get specific, actionable answers to a question – if the question is written correctly.  A poorly designed survey checklist question can hide problems and confuse interpretation.

The skeptic in me says, “Maybe that’s the intent? They don’t want to know the truth.”

We’ll show a checklist question from the Wall Street Journal customer service group that is problematic in its design, along with a retention survey for employees at Boston University that likely made the findings meaningless.

The Basic Elements of a Survey Checklist Question

Most surveys of customers, employees or the like use what are called “checklist questions”.  It’s a good name since it is what it says.  We present a list of options to the respondent and ask which ones fit the respondent. They’re also known as multiple choice questions.

We could pose these as open-ended questions, but then the poor analyst has to try to make sense of all the textual responses.  Yuk!  So, instead we present a list of options from which the respondent can select.  Easier for the respondent and MUCH easier for the analyst.

Checklist questions are heavily used in data collection forms where many of the questions will be demographic in nature.

The reason surveyors like this question type is fourfold.  For the respondent, checklist questions are:

For the surveyor, checklist questions:

Say we had a post-sale product fulfillment survey.  We can ask a binary checklist question:

If the person answers yes, we can branch to a checklist question asking

followed by a list of possible problems.  We can calculate the frequency distribution of certain types of problems – solid data for an improvement project.

Every survey question type has some design considerations.  The goal is to get valid, meaningful data, and these design standards help achieve that. Well designed questions also lower the likelihood of respondents skipping a question — an “item non response” — or abandoning the survey.

The wording of checklist questions is generally pretty straightforward.  The real challenge lies in the set of checklist options.

So, you want a short, but comprehensive list.  Seems contradictory, doesn’t it?  Yes, you’re right.  This is the art of survey question design.  We have to deal with such trade-offs frequently in survey design.

Another design consideration relates to the order of the checklist items.  Primacy and recency effects – choosing the first or last option – are known to occur.  If you put the most likely answer first, you’re creating a bias toward that answer.  The best solution is to randomize the order, negating the order effects.  However, Other always goes last.

Look at the nearby checklist question from the Wall Street Journal (WSJ) customer service website.  As a subscriber, I can go to my account and “Report Delivery Issue.”  Look closely at the list.  Notice what’s missing?  There’s no “Other.” 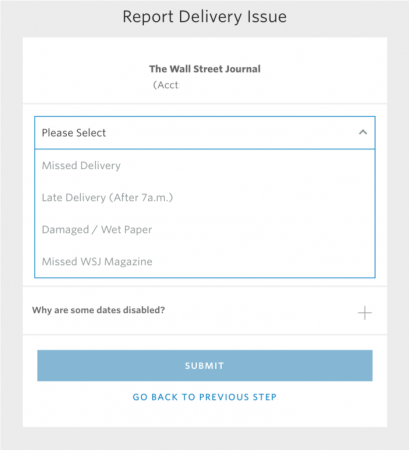 Further, the checklist options are very limited.  I believe the person who designed the list has never gotten home newspaper delivery!  He or she certainly never did any field research to develop the list.  Here’s what’s missing from my own experiences over the decades:

All of this feedback that should go back to the driver, the delivery company, and to WSJ.  Today, it can’t.  If WSJ had included an Other option, they might have learned what to add to the checklist.

Do they not want to know?  It’s not like they haven’t been told.  I have made these comments known to WSJ customer service multiple times over the years, but to no avail.  Nothing ever changed.

However, I recently had such a bad experience with a poorly designed subscription renewal form that I reached out via LinkedIn to the VP of Customer Experience.  I had a long, pleasant phone conversation with a senior manager; I think they are listening.  I hope.

Sadly, all this reinforces my doctoral research from decades ago that many (most) companies choke off feedback from customers via the customer service agents.  Sad.  A company’s products can be improved by doing something that’s apparently novel: listen to one’s customers.  Actively.

Data Cleansing the “Other” Submissions

The lack of an Other text box in the WSJ data collection form wards off the customer service folks there from learning new types of issues their customers have.  But the Other submissions have a downside: data cleansing.

Before you compile results for a checklist question, you must examine all the Other submissions.  You will likely see some ideas for refining the checklist options going forward with the unexpected submissions, such as “Got NY Times, not WSJ.”

However, you will also find people writing in an answer that would seem to fit one of the categories you offered them.  You will need to reclassify those into the appropriate bucket to get meaningful statistics.  Now, you might be thinking, “If I didn’t offer the Other, the respondent would have chosen that option.”  You might be correct, but you might also find that the way you worded that option led people to not choose it.

Critically look at the wording in light of the Other submissions that talk to the same option.  And learn what new options you need in your checklist.

Let’s look at another example of poorly design checklist questions.  This is from an employee survey at Boston University (BU).  They had found that employees were leaving BU because of the commute to the school and the lack of good housing nearby.  (By way of full disclosure I have my graduate degrees from BU and I taught there during my doctoral program.) 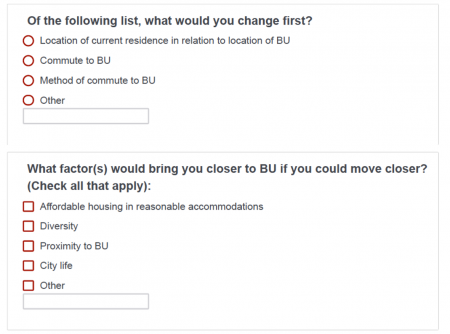 This first question is a wonderful example of overlapping response options.  What’s the difference between:

Most times I can figure out what the survey design meant to write.  Here I can’t.

Let’s look at the next question.  Earlier I said that the wording of survey checklist questions is usually straightforward.  Here it was not.  It’s convoluted.  What “would bring [me] closer to BU”?  Moving closer would bring me closer.  D’oh!  How about: “What factors might entice you to move closer to BU?” 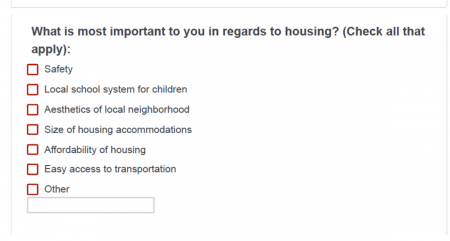 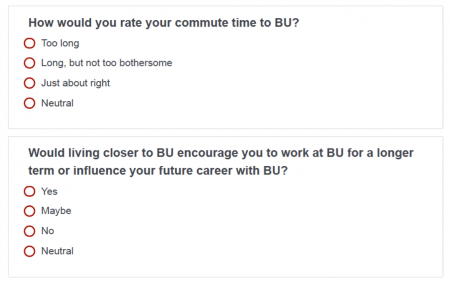 Finally, look at the response options for these last pair of questions.  What does Neutral mean here?  Neutral means “in the middle” or “not strong feelings in either direction.”  How does that differ from “Long, but not too bothersome” and “Maybe”?

As the reader of the report, how would you interpret Neutral responses in the context of these questions?  My guess is that many respondents chose Neutral when they “preferred not to answer”.  Regardless, this survey question checklist option set garbles any idea for a course of action.

Yes, you’d think that they’d tap the research professors to design the survey, but they certainly didn’t.  At least, I hope they didn’t.

Designing good survey checklist questions isn’t rocket science, but a survey designer does need to think about the

And we need to look at the textual responses from “Other; please specify” as the opportunity to learn from our respondents.

Finally, a properly done pilot test before launch might have caught these mistakes.  Why survey designers and form creators don’t think they make mistakes is beyond me.  I wish I were that perfect.

I’ll bet I have a typo or two in this copy despite much proofreading.  Tell me!  I belief in the value of feedback. (Okay, I just planted that mistake.)