Survey Question Type Choice: More Than One Way to Skin That Importance Cat

More Than One Way to Skin That Importance Cat

However, the choices have trade-offs.  Some survey question types provide more useful data for survey analysis.  But those same question types might create too much respondent burden, leading the respondent to skip the question – or the survey in full.

Here we’ll cover options for measuring importance — a critical goal for most surveys.

Let’s illustrate with a very common type of survey inquiry, namely a question that asks the respondent to prioritize among a list of response options.  Our example here is a question asking: what would be important to your next purchase of a laptop computer.  However, you can readily substitute your list for which you want prioritization.

We start with the group of items that we want the respondent to consider — in this case, laptop features — and then identify those that float to the top as important:

When constructing the list, we immediately face one of those nasty trade-offs.

If the list has more than 10 items, it’s almost certainly too long.  The above list is right on the edge, and for some of the question types below, it may be too much.

Providing a long list with the goal of getting greater detail may have a boomerang effect.  It may encourage what’s called satisficing behavior.  That’s when the respondent looks at a long list and picks the first good-enough answer.  That answer may not be the optimal answer, but the long list leads the respondent to satisfice.

Note here that I’m assuming the survey is being delivered by webform or paper.  For a telephone survey, we have to keep the list quite short to minimize the cognitive burden on the respondent.  On a telephone survey, we’re asking someone to listen to the list, memorize it, and select the most important one (or ones) from the list.

A list longer than five items will likely lead to a primacy or recency effect, that is, selecting the first or last item in the list.  That could be considered a form of satisficing.

How do we keep a list short but still capture the detail we might miss?  Include an “Other.  Please Specify” option.  If the respondent doesn’t feel their prime choice is in the list, they can now enter it.  Realistically, we as the survey designer may miss some items as a possible response.

The Other option also provides feedback on the quality of our list.  If lots of people list something in the Other option, we should consider adding that one to the list next time, perhaps swapping out one that was seldom chosen.  Frequently, we also see Other entries that are close to one of the options provided but with some nuanced wording difference.  That might lead us to reword the choices in the future.

Finally, it’s best to have the list, regardless of the question type you select, be presented in a randomized order to each respondent.  This will negate some of the satisficing and sequencing issues in the collected data.

Once we have our list, how can we ask for prioritization?  Here are our survey question choices.

Seemingly, the most straightforward question type is seen in the nearby screen shot.  Ask someone to choose the one most important — known as a Multiple-Choice, Single Response Checklist.

Our analysis will be the percent of respondents who selected each item.

Sounds clean and simple, but…

But we probably don’t what someone to check ALL that apply.  If people check all of them, then we haven’t learned what’s truly important.  Instead, instruct the respondent to check the two (or three, depending on the length of the list) most important.  Now we’re getting the top two in importance.  That likely provides better data for decision making.  (Do note – and tell your readers – that the percentages will now add to 200%.)  And the respondent burden is quite low.

Many survey tools provide edit capabilities for multiple response checklist questions, perhaps in a more expensive subscription.  If so, you could instruct people to check up to two items or exactly two items.  If someone checked three items or, in the second case, fewer than two, they’d get an error message.

Many software tools also support a follow up question for the multiple-choice checklist that would ask, “Of the two you selected, which is most important?”  You would then have the #1 & #2 importance items, which leads us to forced ranking survey question type.

We’ve all seen these questions as in the nearby example.  Forced ranking questions
are a favorite approach since they appear to provide prioritized information, but I caution you about using them.  Why?

Presenting each item to the respondent asking for a response on an interval rating scale is perhaps the most common way to get data on importance.  It’s a nice clean way to get data with fairly low respondent burden, and we can calculate mean scores since the data are – hopefully – interval in nature.

However, the approach has one serious drawback similar to the “Check all that apply” in the checklist approach.  Nothing stops the respondent from giving the same rating to every item.  What have you learned if every item is rated the same?  Nothing!

We really want the respondent to engage in trade-off analysis, and interval rating questions don’t support that goal.  While rating questions are  perhaps the most common way to measure importance, it is arguably the least useful.

The checklist version asked people to select the top item(s) in importance.  In the forced ranking version, we ask people to put the items in rank order.  What if instead we asked the respondents to assign points to each item based on importance?  Now we have a fixed-sum question.  (This goes by different names such as constant sum or fixed allocation.)

We give people, say, 100 points and ask them to assign them to the various items.  The scores must add to the 100.  More points mean more importance.  Our analysis focuses on the mean score for each item (since this is interval data) to see relative importance.  That’s a real plus for this approach. 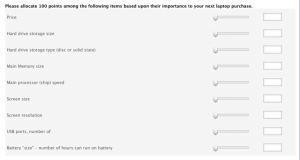 Obviously, the question type has downsides and design concerns:

Measuring criticality or importance is a critical important aspect for many survey designers.

Non-Response Bias: Every Researcher’s Dread and Every Politician’s...Implications of the Federal Agency Customer Experience Act of 2017
Scroll to top