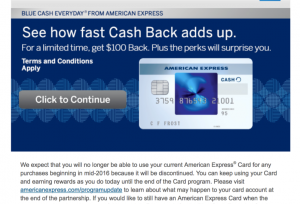 We normally think of a customer journey map as being some long, involved exercise, but sometimes they can be incredibly simple. Simplicity can be a virtue when it comes to a customer interaction process, but simplicity may simply mean that the customer interaction ends prematurely – or dead ends. That describes my interaction with American Express      when – get this —they wanted to retain me as a customer!

You might imagine that American Express would like to retain Costco AMEX cardholders as customers. Accordingly, I got a promotional invitation to apply for their Blue card. (See nearby screenshot.)  Here’s the start of the short and frustrating journey. 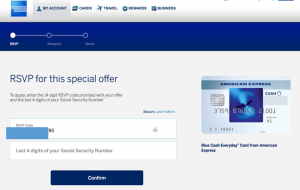 brought to a webpage with my RSVP invitation prefilled and they ask for the last four digits of my Social Security number. (See nearby screenshot.)

I enter the information only to get an error message that tells me to call the phone number that was on the promotional offer email. So I call. I got a gentleman who hemmed and hawed at every question I asked him.  In no way did he take ownership of the situation; he seemed to not want to tell me bad news.  He told me that he could not enroll me and that I had to enroll via an online offer. I read to him exactly the error message I got.  He hemmed and hawed some more.

He suggested that the enrollment function was unable to handle more enrollments at that time and that I should try again in 30 minutes.  I told him I had already tried a week earlier with the same result.  He hemmed and he hawed and he hemmed and hawed some more. 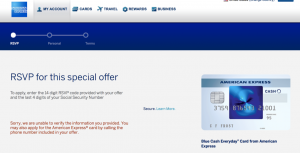 nt that American Express doesn’t want me as a customer anymore.” Then I hung up. Just to prove the point, I did try to accept the promotional offer again – twice – each time with the same result.

So what lessons about customer engagement processes can we take from this?

Oh yes, the email had a link to take a feedback survey.  You can imagine what I told them.  Let’s see if I get a call now…  (Holding my breath I’m not!)

Addendum.  No, I didn’t get a call back.  But my wife tried one more time.  Fortunately, she got Mario on the line, who actually wanted to be helpful!  Which means 1) he didn’t just hang up, 2) he wasn’t obsequious, and 3) he actually wanted to provide service!

The problem with our account was that the social security numbers for my wife and me got swapped.  I tried to suggest this to the previous agent, but he just wanted to get rid of me — but in a non-rude manner.