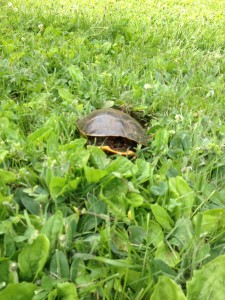 Yes, the TSA (Transportation Services Administration) wants you to be at blame if you miss your plane.

TSA claims to be doing all it can – of course.  But… Enrollment in the “trusted trave 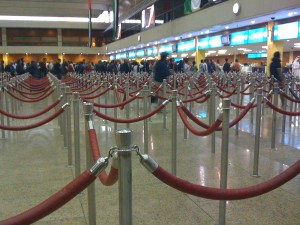 ler program,” allowing faster Pre-Check screening, has reached a third of the goal.  TSA has reduced the number of people it gives access to Pre-Check increasing the other lines. After the failure to detect contraband in test cases, TSA has made the X-ray screening tighter, meaning more bags need personal screening.

The net effect of all this is to decrease the number of people TSA can screen per hour in a screening line.

So what’s the advice to the traveler?

TSA and airlines have started advising travelers to arrive up to two hours before a domestic departure and three hours for international flights.

Not only does that do no good, it actually makes the situation worse!

The root problem is insufficient capacity at baggage screening.  Having people arrive earlier does NOT increase capacity!  If there were lulls where capacity went unused, then it would matter.  But when was the last time at the airport where you saw TSA lines empty and the screeners twiddling their thumbs?

Now rather than having queuing space to handle, say, one-hour’s worth of passenger arrivals, now the queues have to accommodate two-hour’s worth!  Longer lines mean more congestion, more passenger angst.

Except that now TSA can now say, “It’s your fault you missed the plane.  You didn’t come early enough.”

It’s stunning that people in charge of a customer service operation don’t understand the basics of a queuing process.

Or maybe they do.

But I do have a real suggestion for TSA — layoff people

Yes, lay off a third of the blue shirts.  (Those are the TSA workers.)  Yup, lay them off. 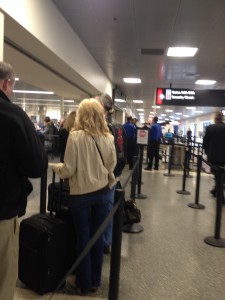 Recently, I was coming home from an international trip with Newark as my US arrival.  On a Wednesday mid-afternoon the lines went on forever.  (We’ll put aside for a moment that the signage in Newark stinks.)  The lines barely moved.

And I found out why.

The X-ray screener would frequently have to get up to grab a bag for rescreening or something else.  You might say, “Okay, that’s the way it is.” But about a third of the blue-shirted TSA agents had no assigned job.  They were floaters.  (Believe me, I had enough time to count.)  Why the heck can’t the floaters be the X-ray screener’s helpers?

Seems obvious to any rational person.

But it gets worse.

These floaters were also talkers.  Since they had nothing else to do, they would chat with the X-ray screener, not on work matters, but on personal things.  (I could hear the conversations.) So the bottleneck – the X-ray screener – is being distracted from working!

So, TSA, lay off the people who distract the people who are actually working and you’ll increase capacity and shorten the lines. And save taxpayer $.

Meanwhile, send someone to Dubai to benchmark their revised screening process.  It’s faster by a multiple of two or three. Really.  It’s an assembly line like nothing I’ve ever seen. And some of these screened passengers are coming  to the US.  So, if the screening there isn’t up to US standards, why can the flights come to the US?  And if it is, let’s learn from them.